This post originally appeared on The Maker Mom. From May to early August, I’m serving as The Maker Mom-in-Residence at mHUB, Chicago’s new innovation center for physical product development and manufacturing. In addition to making cool stuff as I learn to use their 3D printers, laser cutter and more, I’m also going to feature mHUB members and the products they are working to launch. I also expect to interview Chicago Makers and local women in STEM.

First up is Joseph Greer, founder of MakeXchange, which recently launched an electronics invention set for beginners. I met him last summer when he first joined the mHUB community. It’s been exciting to see his idea come to fruition in the last nine months. The Arduino Inventor’s Lab (and the companion airplane kit) is currently on pre-order. We’ll be sure to share on this site if he other local workshops or programs planned.

A Great Arduino Kit for Families

There are a growing number of kits that help people learn to use microcontrollers like Arduino and Raspberry Pi. I’ve received samples of several. They tend to be similar in terms of the components they contain. The MakeXchange Inventing with Electronics Kit really stands out, however, when it comes to design.

Joe and I discuss the whats and whys of the kit design in the video below. You can watch or simply listen to the video, but I’ll share a few highlights of the MakeXchange electronics kit:

It’s one of the most inviting electronics invention kit I’ve ever seen.

It opens up and stores like a book while providing for a built-in work space. Projects don’t need to be disassembled when it’s time to clean up and you won’t mess up your kitchen table or workbench when you leave your work-in-progress. 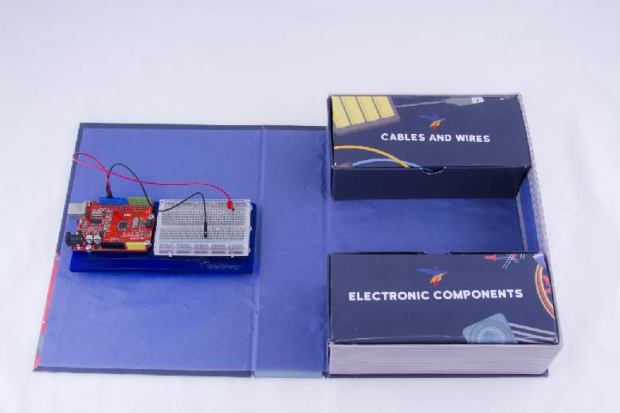 Every component has its place. Regardless of the user’s age, it’s so much easier to keep things organized when there’s a system in place.

Watch the video to learn more about Joe, the kit and the process and making it all come together.

Bring STEM Kids news and events to your inbox twice a month!